The Capitol Report For The Week Up March 6-10 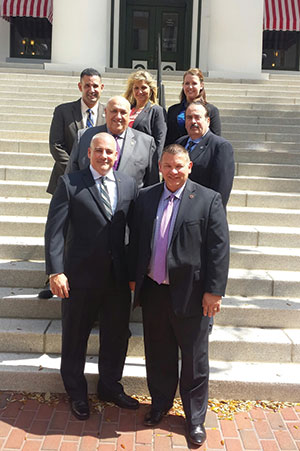 The Legislature was off to the races after the normal pomp and circumstance of opening day flashed by with very little fanfare. Legislative committee meetings started earlier and ran later than normal for a first week which keeps with the unusual pace from interim committees. The lobbying corps and legislators may be uptight about the workload at this point in the session, but, one thing is for sure, bills are moving.

PBA had multiple bills up during the first part of the week which gave us time to conduct important meetings on Thursday and Friday. If you have been keeping up with our weekly reports (and I encourage you to do so, because this report is a weekly running thread not an exhaustive “here’s everything you need to know” outline), then you know our lobbying team feels good about how we keep checking off our weekly goals.

So let’s discuss where we are after week one and the direction we are heading.

State Employee Pay Raises
All indications point to legislative budget allocations being released next week. Therefore, it was imperative to get our proposal to the Legislature early and we did. We have issued PBA’s wage proposal to all of the appropriations (budget) staff and the legislative leadership.

Our proposal includes an across the board ($10,000) wage increase, an increase of $10,000 to starting salaries, the creation of a career development plan (step plan), expansion of CAD and increases to the salary incentive program. We testified before the Joint Legislative Collective Bargaining Committee in February and outlined our plan which is designed to move all PBA bargaining units (Corrections, Probation, Highway Patrol, State Law Enforcement, FDLE Special Agents and Lottery) into a completely new broad band level. It is aggressive, especially compared to other state employee units, but we believe it is necessary.

The Governor released his proposal, too. He included raises for all of the PBA bargaining units and no other state employees.

Once the Legislative proposals are released, we will understand the full range of potential options on the table. This means we will have at least four different proposals on the table. Do not be surprised if at least one proposal is a “no raise” proposal. That is how bargaining works. We have until late April to resolve this issue.

State Employee Health Insurance
State Group Health Insurance is an interesting subject for a number of reasons. First, the PBA proposed no increases to the premiums and no change to the current offerings. Second, the Governor’s proposal does not increase premiums for single coverage and family coverage, but it eliminates the spousal program which affects roughly 1,500 of our members. Finally, there is a legislative proposal that could potentially add many more options for the membership to bargain over.

Our top priority for this session is to keep the premium costs under control and keep the spousal program in place.

However, we should be working to bring in more options to bargain over in future years. We have no leverage at the table on this issue. Our position could be dramatically improved if we could “wheel and deal” on multiple coverage options.

The Legislature has not raised premiums on the active employees for twelve years (how much longer do we honestly believe that will last?), but the retirees have taken a yearly hit. Although active employees have not seen a premium increase, the state has absorbed double digit increases to its share of the health insurance premium each year. Simply hoping for no increases to the employee premiums is not a great strategy. We need to be able to bargain on more options to keep the costs reasonable while maintaining high quality coverage.

We are supporting HB 7007 by Representative Jason Brodeur which gives the state and its employees many more options to bargain over in the coming years.

PBA Executive Director Matt Puckett testified in support of this legislation on Wednesday.

Florida Retirement System
There are multiple bills to keep tabs on this session, but nothing of real consequence moved this week. We are waiting for the actuarial studies on the reinstatement of the COLA to be completed. Stay tuned.

Local Pension Plans
HB 533 by Representative Janet Cruz concerning changes to the Tampa pension plan received a hearing in the House’s Local, Federal & Veteran Affairs Committee. It passed unanimously. The plan is a special act requiring legislative approval to the changes from the latest round of collective bargaining. PBA Lobbyist Gary Bradford attended the meeting to monitor the bill’s progress.

Body Camera Review
SB 624 by Senator Greg Steube received a hearing this week in the Senate Criminal Justice Committee. The bill will allow a law enforcement officer to review the footage from his or her camera prior to writing a report, or making a statement about an incident arising from his or her official duties. PBA Executive Director Matt Puckett testified in support of the legislation while also receiving some very pointed questions about the bill’s intentions. There are a couple of legislators who believe allowing an officer to review the footage opens the door to misuse and, perhaps, abuse. The bill passed the committee unanimously, but it was a controversial hearing. Stay tuned.

The “Sheriffs Should be Elected” Bill
HJR 721 by Representative Jason Fischer also received a hearing this week in the House’s Local, Federal & Veteran Affairs Committee. In a nutshell, this legislation will place a constitutional amendment on the ballot requiring that all sheriffs must be elected. Only Dade County has an appointed public safety director instead of elected sheriff. PBA President John Rivera testified in support of the legislation which was opposed by Dade and Broward Counties. The bill passed the committee unanimously.

Public Records Exemption for a Witness to a Murder
Both bills ( SB 550 and HB 111) received hearings this week. The legislation will exempt from the public record a murder witness’ personal information from the public’s view for two years. PBA testified in support of the legislation. Both bills passed.