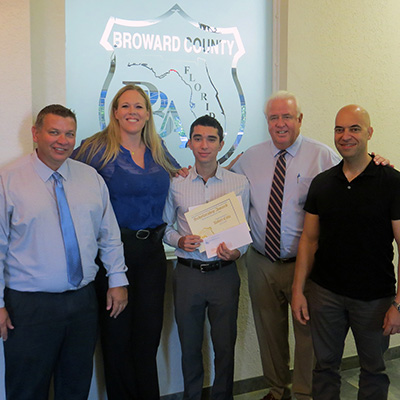 The Broward County Police Benevolent Association, Inc. (BCPBA) presented awards to the winners of its annual college scholarship essay contest at its quarterly board of directors meeting held on July 19, 2018.

The organization awarded top scholarships for the 2018-2019 academic year to five students of the organizationâ€™s law enforcement members. The essay topic for the applicants was, â€œThe opioid crisis in America has reached epidemic proportions, and this disease doesnâ€™t discriminate based on race, ethnic origin, age or socio-economic status. Families are being destroyed, and there doesnâ€™t seem to be an answer to eradicating this problem. New solutions must be developed, and the law enforcement component must be part of the new equation. What do you think law enforcementâ€™s role should be in striking a balance between upholding the law against the possession and use of illegal narcotics and the option of treatment, instead of punishment, for the offender?â€

This yearâ€™s first place winner is Robert Cuba of Pembroke Pines. Robert received a $1,200 scholarship, which will be applied toward his education at the University of Florida. The first place scholarship award was sponsored by Matthew Oppedisano of the Wellington, Florida-based Law Enforcement Retirement Advisory Service.

The second place winner was Lexi Oâ€™Brien of Fort Lauderdale. Lexi received a $600 scholarship, donated by Richard Applefeld, and will be applied toward her education at the University of Central Florida.

The Broward County PBA Annual Scholarship Award was founded in 2003 as part of The HOPE Fundâ€™s mission to assist the children of law enforcement members in their effort to attend college. To be eligible for the scholarship, participants must be the son or daughter of a Broward County PBA member in good standing and plan to be a part-time or full-time student at an accredited two- or four-year university. More information about the scholarship can be found at bcpba.org.

With the recent increase in media scrutiny, police officers have been facing mounting pressure to meet high standards in every aspect of their jobs. The opioid crisis creates a new challenge: should police officers arrest opioid addicts at the cost of breaking up families and potentially derailing lives?

According to Sir Robert Peel, the founder of modern policing, one of the core principles of policing is â€œTo recognise always the need for strict adherence to police-executive functions, and to refrain from even seeming to usurp the powers of the judiciary, of avenging individuals or the State, and of authoritatively judging guilt and punishing the guilty.â€

Peelâ€™s statement provides strong philosophical support for the idea that the police should address opioid abuse by enforcing the law, the same way they are expected to address other crimes. Although ignoring the individual needs of opioid addicts seems objectionable at first, there are numerous reasons why Peelâ€™s principle still holds true in this case.

Before they have a chance to be arrested, opioid addicts have many treatment options available to them. They can have their health insurance company pay for their rehab, seek out help from charitable or faith-based organizations, or stop abusing drugs on their own. But once their addiction becomes problematic enough for them to be confronted by police, whether itâ€™s for a drug-related offense or for some other crime, the best course of action is for the officers to arrest the offender to prevent further harm.

Our society has come to expect a lot from police officers, but legally, it is the responsibility of the courts to decide the fates of the accused. They specialize in this task, so they are much better equipped to find a solution for each person who is arrested, whether that solution involves treatment, punishment, both, or neither.

Evidence linking substance abuse to crime provides a strong argument that police officers have a responsibility to separate drug addicts from their communities to promote public safety. A 1981 study found that opiate addicts in Baltimore were six times more likely to commit crimes while they were using opiates than while they were abstinent.

The police do not have the necessary resources to single-handedly solve the opioid crisis, but they donâ€™t have to. The role of law enforcement should primarily be to enforce the law to protect the community. It is up to higher levels of government to create and modify laws, and the courts have the final say on the best way to interpret those laws for the benefit of society, but this only matters if the police do their part and bring them opioid addicts in need of assistance.