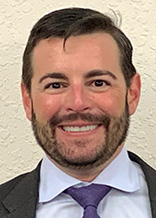 White joins the Broward County PBA after spending the last two years as an Assistant State Attorney for the 17th Judicial Circuit. In his new role, White will assist General Counsel Michael Braverman in the PBA’s expanded legal department, which incorporates PBA-affiliated attorneys from Palm Beach and Miami-Dade Counties as well.

“We are very happy to announce the hiring of attorney Michael White as our new Associate General Counsel,” Broward County PBA President Rod Skirvin said. “Michael spent the last two years in the State Attorney’s Office, and he was very friendly to the law enforcement officers of Broward County. We look forward to introducing Michael to our membership.”

While serving in the State Attorney’s Office, White was responsible for investigating and prosecuting hundreds of cases across numerous divisions, including jury trials, motions to suppress, pretrial motions and non-jury trials. In 2018, he was nominated by MADD (Mothers Against Drunk Driving) for Prosecutor of the Year for the state of Florida. In addition to his experience as a prosecutor, White worked in the financial sector, serving as an analyst/associate for Davis Selected Advisors, Deutsche Bank and Nomura Securities. He also co-founded a bespoke dog food company called Hudson’s Chow, LLC.