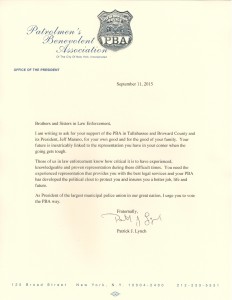 Brothers and Sisters in Law Enforcement,

I am writing to ask for your support of the PBA in Tallahassee and Broward County and its President, Jeff Marano, for your own good and for the good of your family. Your future is inextricably linked to the representation you have in your corner when the going gets tough.

Those of us in law enforcement know how critical it is to have experienced, knowledgeable and proven representation during these difficult times. You need the experienced representation that provides you with the best legal services and your PBA has developed the political clout to protect you and insures you a better job, life and future.

As president of the largest municipal police union in our great nation, I urge you to vote the PBA Way. 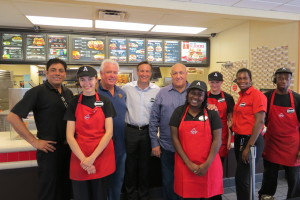 A collective bargaining session between the City and the Police Benevolent Association (PBA) is scheduled as follows:

Fort Lauderdale, Florida â€“ September 2, 2015 Â — The President of Broward Countyâ€™s largest police union has called for a boycott of Arbyâ€™s restaurants following an incident on Sept. 1, 2015 during which a uniformed police officer in Pembroke Pines, Florida was refused service by a manager at the drive-through window.

â€œThis behavior is unacceptable,â€ said Jeff Marano, BCPBA President. â€œThe disdain and lack of respect for law enforcement, as well as the fatal attacks on the men and women in uniform in AmericaÂ is appalling.â€

The Broward County PBA ask that anyone in law enforcement, or anyone who supports law enforcement, boycott Arbyâ€™s immediately. In her letter to Arbyâ€™s management, Sgt. Jennifer Arcuri, writing on behalf of Sgt. Jennifer Martin, described how Martin chose to use the drive-through window to obtain food rather than risk exposure by sitting in an open restaurant where her uniform might make her a target.

â€œThis is intolerable. We expect a full apology to all police officers,â€ Marano said. â€œWe also ask that the manager of the Arbyâ€™s, who refused service to a uniformed police officer, be fired.â€

â€œLaw enforcement is under siege in the United States,â€ Marano continued. According to statistics tracked at the Officer Down Memorial organization there have been 83 line of duty deaths so far in 2015. There were 14 deaths in August including 24 deaths this year involving firearms.

To read more about the incident, and view documents, visit the bcpba.org website.

The Broward County Police Benevolent Association is the largest law enforcement union serving Broward County. BCPBA is a non-profit organization providing labor relations assistance and collective bargaining services for its members. Our mission is to promote professionalism in law enforcement and to protect the rights and privileges of individual law enforcement officers and civilian employees, as well as to keep citizens informed of the challenges facing law enforcement today. We are active in community events including those that support and honor law enforcement. 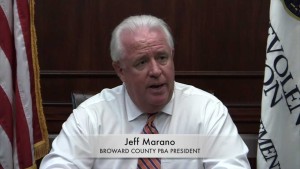