* The document circulating the department dated July 24, 2015 is not the final agreement.

A PDF version of the memo is available at the BCPBA website here:

The BCPBA and the City of Hollywood reached a tentative agreement on July 24, 2015.

As many Hollywood LEOs are new members, we understand this may be the first contract you are voting on. We hope the information below will help you understand the process and terms.

At present the BCPBA and City of Hollywood have reached what is known as a tentative agreement. Once the contract language is complete, both the Broward County PBA and the City will agree on the changes and a fact sheet will be provided. The City will draft the pension changes, which are in the ordinance. Those changes will be reviewed by the PBA attorney, and, in the past, the Pension attorney, Chairman and Pension Administrator. Once the documents are finalized, the members covered under the Collective Bargaining Agreement (CBA) will vote on the contract. The Public Employees Relations Committee (PERC) has spelled out specific procedures for the process. In order for the contract to pass, the membership must cast more yes votes than no votes. The Broward County PBA will notify the City of the results.

The pension vote is conducted by the pension administrator. Active members with the City of Hollywood plan vote on the changes, which takes 50% plus one to affirm. After that, a super majority of the Hollywood City Commission (5 out of 7) votes on the pension change at a commission meeting. Both of these must occur in order to affirm the change to the Hollywood Police Pension Plan.

The CBA must have two readings by the City Commission in order to take effect. Furthermore, the City must have an actuarial/impact report from the Cityâ€™s actuary prior to voting on the agreement.

The City Commission is on break. The next meeting is scheduled for August 25, 2015.

All parties are working to have these moving parts in place prior to the August 25, 2015 City Commission meeting when the vote will be placed on the agenda. 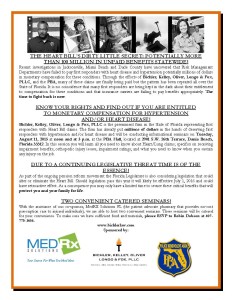 Bichler, Kelley, Oliver, Longo & Fox, PLLC will be conducting informational seminars on Tuesday, August 11, 2015 at noon and at 5 p.m. at the PBA Hall, located at 2901 S.W. 26th Terrace, Dania Beach, Florida 33312. In this session you will learn all you need to know about Heart/Lung claims; specifics on receiving impairment benefits; orthopedic injury issues; impairment ratings; and what you need to know when you sustain any injury on the job. 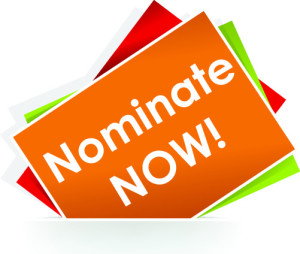 The Broward County PBA will accept nominations for SEVEN (7) PBA Representatives during the dates of August 5, 2015 through August 21, 2015 (extended on 8/10/15) to represent the BSO Deputies and Sergeants Bargaining Unit.
If you would like to nominate a fellow member to be a PBA Representative, please call the Broward County PBA at (954) 584-7600 anytime during the above dates from 8:30am to 4:30pm.

Due to the phone outage at the PBA office last week,Â the nomination period has been extended to
Friday, August 21, 2015. 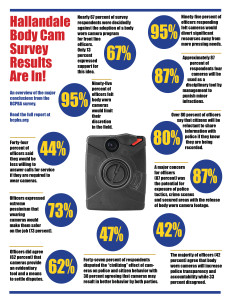 Fort Lauderdale, Florida â€“ August 4, 2015 â€“ The Broward County Police Benevolent Association (BCPBA) has released the results of an opinion survey on body-worn cameras by rank-and-file City of Hallandale Beach police officers. The complete survey report may be found at the bcpba.org website.

The union notified the City of Hallandale Beach of the survey and allowed input before being completed and mailed on June 3, 2015. The survey was sent to law enforcement officers from the rank of sergeant and below, not just to those officers participating in the pilot program.

Following is a summary of the survey conclusions:

Included in the survey report are comments from officers. One comment summed up the feelings of many: Â â€œI think officers will be worried only about their cameras and forgo safety. Officers will second guess themselves on personal safety and get hurt.â€

â€œCamera limitations: doesnâ€™t see what the officer sees. Canâ€™t acknowledge physiological & psychological phenomena officers experience under high stress. Some important danger cues like â€˜tensioningâ€™ of a subject are not recorded but experienced by officer â€“ we may feel sensory clues that a camera does not. Camera may have better â€˜eyesâ€™ than a particular officer (i.e., no 20/20 vision, low light conditions). Officer liabilities: not protected by current legislation in Floridaâ€¦ Primary issues: Officers & citizens, cameras may provide negative issues/sensitive subject matter to be disclosed by public records requests.â€ (Item #1)

StatementÂ from BCPBA President about the survey

â€œBased on discussions and opinions of officers throughout the country, and as reflected in the survey results from Hallandale Beach, the negative impact of implementing a body-worn camera program is clear,â€ said Jeff Marano, President of the Broward County Police Benevolent Association. â€œThere were no surprises. Itâ€™s just as we predicted.â€

The Broward County Police Benevolent Association is the largest law enforcement union serving Broward County. BCPBA is a non-profit organization providing labor relations assistance and collective bargaining services for its members. Our mission is to promote professionalism in law enforcement and to protect the rights and privileges of individual law enforcement officers and civilian employees, as well as to keep citizens informed of the challenges facing law enforcement today. We are active in community events including those that support and honor law enforcement.