Here is quick status update regarding contracts at the various police agencies that the Broward County PBA represents.

BSO
The BCPBA had its initial meeting with the Broward Sheriffâ€™s Office on Thursday, April 9, 2015. We brought proposals based on input from the membership survey. Please read BCPBA Secretary, Lee Martinâ€™s, column to learn what happened at the meeting.

Hallandale
The BCBPA met with the City of Hallandale on March 26, 2015 to open negotiations. The next step is for the city to set tentative dates to hear our contract proposals.

Hollywood
On Thursday, April 9, 2015 a second meeting about pension issues and reform was held at the Fred Lippman Center in Hollywood. On April 16, 2016 the BCPBA also held a negotiation session with the city.

Miramar
The BCPBA notified the City of Miramar that it is ready to begin negotiations. We are waiting for a meeting date to be scheduled.

Sunrise
A notice that the BCPBA is prepared to begin negotiations was sent to the Sunrise city manager. The BCPBA is waiting for a meeting date to be scheduled. The BCPBA has received positive feedback on our progress working with the city.

Congratulations to BSO Deputy Kevin Bolling who received the Broward TRIAD 2014 Officer of the Year Award.Â Broward TRIAD is a three way collaboration between law enforcement, seniors and community service organizations working to improve the safety and quality of life for Broward seniors since 1992.Â The group meets every first Thursday at the Davie Police Department at 9:30 a.m. All are welcome.Â Broward TRIAD is a member of NATI, theÂ National Association ofÂ TRIADS. 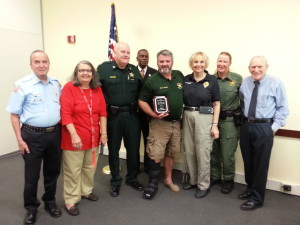 BCPBA has begun negotiations with the Broward Sheriff’s Office on behalf of Lieutenants and Deputies and Sergeants.

Relevant documents are listed below. 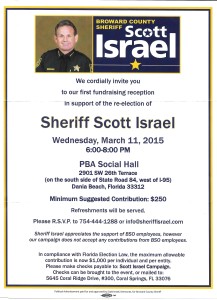 You are invited to the first fundraising reception in support of the re-election of Sheriff Scott Israel.