The Legislative Session Continues, And The PBA Has Been Very Busy

Two years ago (right after passage of the omnibus pension bill), a fellow labor friend and I were discussing what the changes in the bill meant to the larger scheme of things. Specifically, we wondered if exempting newly hired special risk employees from defaulting into the investment plan (which we were able to do) was the “beginning of the end” or the “end of the beginning”. The answer remains to be seen, but may slowly be coming into focus.

There are two competing thoughts on this subject. The first believes we are all in this together and exemptions between the employee classes (like defaulting into the investment plan for non-special risk new hires) will eventually catch up with everyone. The other believes special risk employees can separate from the rest of the employee classes and continue to thrive. The municipal systems have done this for years.

We will likely learn which school of thought is correct over the next decade.

How we negotiate through this forth coming period will determine much of the outcome, but a portion (perhaps a sizable portion) will be decided by the luck of the economy. The old compensation systems are falling out of favor with the public. Salaries, pensions and retiree health insurance are the biggest costs to any agency and during a recession the public can be persuaded, because of envy, to turn against you. When a bad economy strikes, the target on your compensation grows larger.

To avoid the backlash, we must think of better ways to pay for the benefits and the methods of delivery. The systems are undergoing changes because of demographics and attrition. There are a large number of innovative road maps at the local level and from other states to show us how to precede; therefore, we must be willing to try out new ideas.

And that’s exactly what we will do. This year, in our opinion, is another step on a new path. A lot of our ideas are at the moment, just that… ideas, but as we explore and work with our allies much of what we want to accomplish will materialize into legislation.

If you have an idea that you think we should hear please email me, or local representative.

Here’s where we are as of today… in no particular order.

We continue to negotiation with the Department of Management Services over our contract re-openers with all of our state bargaining units. On Monday, we testified before the Joint Select Committee on Collective Bargaining please skip to 1:16:46 to watch our testimony, or you can watch the whole meeting.

SB 784 by Senator Joe Gruters and HB 779 by Representative Chuck Clemons
This Legislation will create a COLA floor of no less than 2% for all Special Risk Employees hired prior to July 1, 2011. The legislation requires a special impact study in order to become law. Our study request was submitted to the Division of Retirement. We are now waiting for the results to come back to us. Remember this legislation is designed to stop the bleeding.

SB 920 by Senator Jason Pizzo and HB 1021 by Representatives Chris Latvala
The idea is to help speed up the process for an arrest of a DNA match. Current law, requires a search warrant to collect a buccal swab of a person who matches a crime scene sample and an offender profile in CODIS. This step was added because sample collections are performed by humans and humans make mistakes. However, we strongly believe that a warrant for arrest should be an option available to a judge when a CODIS match is found.

SB 920 by Senator Jason Pizzo will receive a hearing on Monday, March 18 in the Senate Criminal Justice Committee.

SB 76 by Senator Wilton Simpson and HB 45 or 107 by Representatives Emily Slosberg and Jackie Toledo
This Legislation will attempt to make distracted driving, or, at a minimum, texting while driving a primary traffic offense. Our organization has been involved with this legislation for multiple years now.

Criminal Justice
We continue to be involved in the debate around criminal justice reform. The Senate is conducting a full scale review of our sentencing laws to specifically include minimum mandatory sentences for drug offenses, along incarceration models and diversion programs.

Other Issues
We are also working with other special interests groups on an array of issues during this session. You can always contact the PBA if there’s a question about something that we did, or did not cover.

In his new role, Braverman will lead an expanded legal department which now incorporates PBA-affiliated attorneys from Palm Beach and Miami-Dade Counties as well.

â€œWe are proud to bring our members the most powerful legal department in PBA history,â€ Broward County PBA President Rod Skirvin said. â€œWe have joined forces with the Dade and Palm Beach County legal teams to combine with our already highly respected attorneys, who are well established in Broward County.â€

The Florida Capitol Report For The Week Ending January 11

An opening week of celebration to welcome in the new leaders of Florida’s state government was highlighted by the Inauguration of Governor Ron DeSantis, Lieutenant Governor Jeanette Nunez, Attorney General Ashley Moody, Chief Financial Officer Jimmy Patronis, and Commissioner of Agriculture and Consumer Services Nikki Fried. The mood was festive, yet business like, giving us multiple opportunities to discuss our legislative priorities with Legislators and new members of the Florida Cabinet. We are eager to get going and excited for what the future holds.

Florida Police Benevolent Association’s Board of Directors set several priorities for the upcoming session. Most of the items are from previous years:

This session, the board added the following items:

The agenda is not complete since there are several other areas in terms pay, retirement and public policy that we will be involved with before the session ends on May 3, 2019.

Our lobbying team had contact with legislative budget leaders to begin discussions on across the board pay raises and career development plans for our state employee bargaining units. The budget outlook has slightly improved since the last Capitol Report correspondence which is encouraging. The next step will be negotiations with the Department of Management Services (DMS) over each sides wage proposal. The proposals will be sent to the Legislature for final determination. The process will take place over the entirety of interim committee weeks and the full legislative session.

Our team also discussed a Florida Retirement System study request with new leaders in the Legislature. We have been talking to members of the leadership since the early summer of last year. A new actuarial impact study will have to be complete before the Legislature can enhance any of the FRS benefits. We are requesting several options to examine restoration of the COLA, restoring years of service and age. Our sponsors for the Legislation are Senator Joe Gruters and Representative Chuck Clemons.

We also discussed updating Florida law to allow a CODIS hit to grant probable cause for an arrest instead of probable cause to take a DNA sample from the match in the CODIS. The law was created back when DNA science was in its infancy. Today, DNA sample are as accurate as a latent fingerprint. Our position is as follows – waiting for the results of a DNA match following a CODIS hit unfairly places the public in danger. Not to mention, the delay gives a suspect time to flee.

All in all, this week was successful.

Our lobbying team and a great many of PBA elected officials were able to attend the Inaugural events while also advancing our issues for the upcoming session. 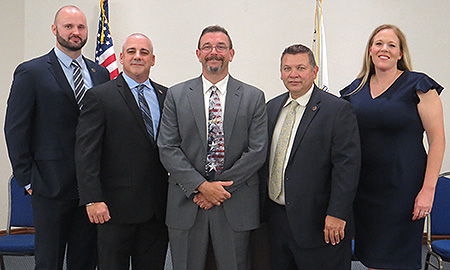 The Broward County Police Benevolent Association, the voice of law enforcement in Broward County, announces the transition to its new Executive Board following the swearing-in ceremony on Thursday, January 3, during the organizationâ€™s January Board of Directorsâ€™ meeting.

Rod Skirvin takes over as President after serving the previous six years as the organizationâ€™s Vice President. Skirvin, a 25-year member of the Broward County PBA, was a detective with the Coconut Creek Police Department upon his retirement from that agency in January of 2018.

Thomas Tiberio moves into the role of Vice President after serving as the organizationâ€™s Treasurer since June of 2016. Tiberio is a Sergeant with the Miramar Police Department, and has been a member of the Broward County PBA since 1996.

Kevin Loughran begins his first, three-year term as Treasurer. Loughran is a road patrol officer with the Wilton Manors Police Department, and has been a member of the Broward County PBA since 2014.

Meghan Anderson continues in her position as the organizationâ€™s Secretary, after being elected to her second, three-year term. Anderson is a Broward Sheriffâ€™s Deputy and is currently assigned to the Parkland criminal investigations unit. She has been a member of the Broward County PBA since 2002.

As the president of the Broward County Police Benevolent Association, we are committed to protecting the rights of our men and women in blue and ensuring that our communities are safe. When Floridians vote in this Novemberâ€™s general election, they should vote NO on Amendment 3â€”which would risk school security funding and make it harder to keep our classrooms as safe as they ought to be.

The leading proponents of Amendment 3 are running countless ads on TV and social media discussing how this law would purportedly empower voters by giving them the reins for any gambling expansion in the state.

What they donâ€™t want voters to know is that Amendment 3 would jeopardize hundreds of millions of dollars in current education funding that goes directly towards the Education Enhancement Trust Fund (EEFT). Additionally, Florida would walk away from hundreds of millions of dollars in future education funding going directly towards the EEFT. That fund has a Safe Schools Allocation and a Mental Health Assistance Allocation. In translation, that money helps keep our kids, teachers and classrooms safe.

This funding also pays for School Resource Officers (SROs) and goes directly towards expanding school-based mental health care in our education system, which helps to minimize violent incidents at schoolsâ€”many of which stem from a lack of care. Research has shown that almost 60% of the mass shootings that have taken place in our country have been carried out by people with a diagnosed or demonstrable mental disorder.

It should be stated that the Broward County PBAâ€™s opposition to Amendment 3 does not mean that we support gambling. Local communities should be empowered to make those decisions that reflect the desires of their constituents. However, a blanket ban like Amendment 3 that risks hundreds of millions of dollars of funding that goes towards our education system and keeping our students safe, is not worth considering.

We should be doing everything in our power to ensure that our schools have ample resources for more SROs. This last session, the governor signed into law a sweeping bill that, in part, helps to protect our schools from the type of attack we saw at Marjory Stoneman Douglas High School. Here in Broward County, fulfilling the requirement to fund at least one SRO at every school has stretched the county budget thin. Why would we pass an amendment into our stateâ€™s Constitution that might make it harder for local governments to properly fund education and keep our schools safe? The fact is that this amendment, written by large corporate interests for their benefit only, would make our schools less safe.

That is why on November 6, we hope that voters will make the right choice and vote NO on Amendment 3â€”for the safety of our schools and our children.